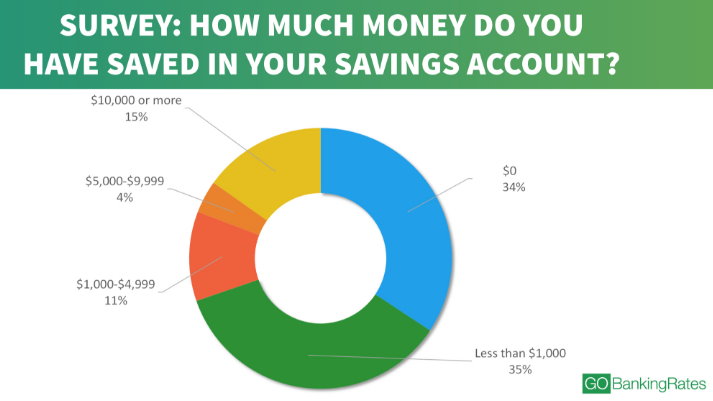 According to a 2016 survey by GoBankingRates.com, Americans are struggling harder to put money into savings to secure their financial future than they were in 2015. In fact, a survey of more than 7,000 people showed that the statistics are worse than in 2015 with 60% of Americans having less than $1,000 in their savings accounts.

Of course people with low incomes find it harder to save, but what is really shocking is the number of people earning six-figure incomes who have zero savings, probably due to higher than average spending on things like housing, luxury cars, college tuition and the kids. Nearly half of the people surveyed who earn $100,000 – $149,000 a year have less than $1,000 in savings while 18% have zero savings.

Ability to save does get affected by the higher cost of living in many American cities and high-priced suburbs. When families do the math for the month they have little to nothing left for savings after the essentials of living.

No matter what the situation is, there are ways to save. I always recommend saving in small amounts more frequently, allocating smaller amounts out of each paycheck rather than a big chunk out of one paycheck. Cutting back on discretionary spending and committing that cash to savings can add up fast; for example eating at home instead of dining out so often. And of course not trying to keep up with friends and neighbors who are probably in debt from living beyond their means.

When you are retired and the kids are off building their own lives it isn’t going to seem nearly so important that you had great furniture in your house or fabulous clothes in your closet. What’s going to be much more important is your ability to take care of yourself when the income faucet is turned off, and what you did with your life that was meaningful in terms of accomplishments; the time you spent being a good family member and community member.